Ed did the most wonderful thing today....

we went for this ride... 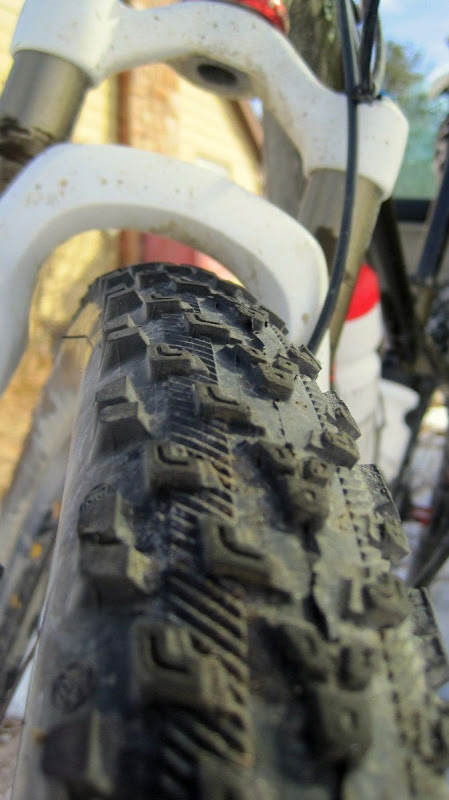 that I'm pretty sure is his least favorite ride-route. I know it bores him to tears.

But he and his shadow... 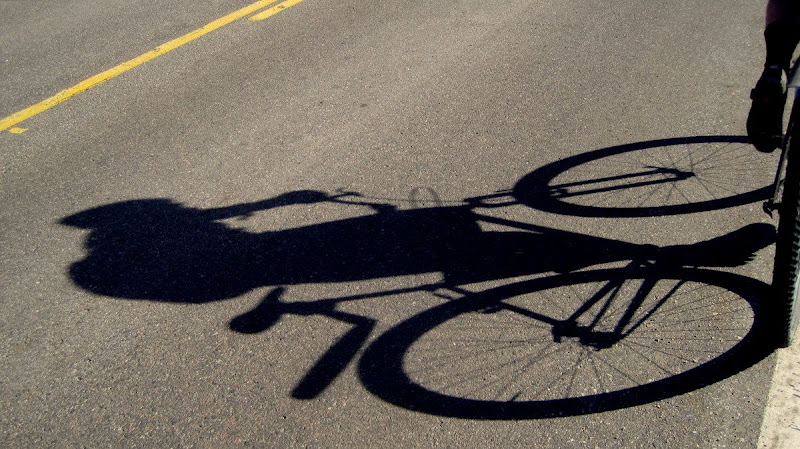 kept me and my shadow... 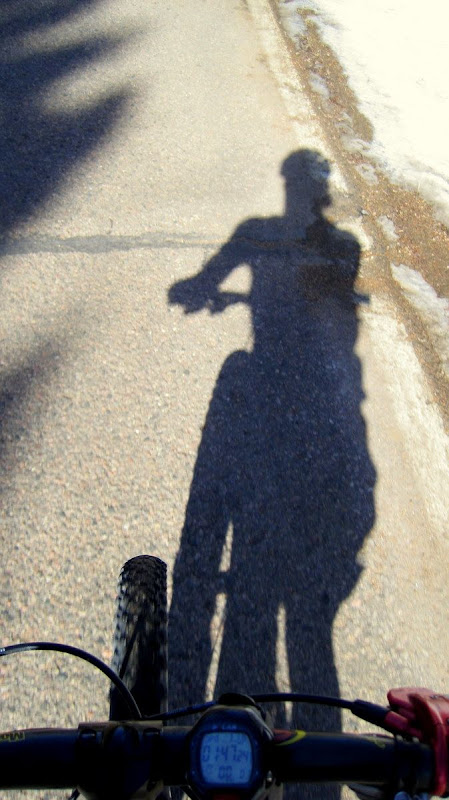 Tragically, this poor bunny has seen better days. BunBun has been face-down for at least 2 weeks, as I pass by him on my lunch roll. 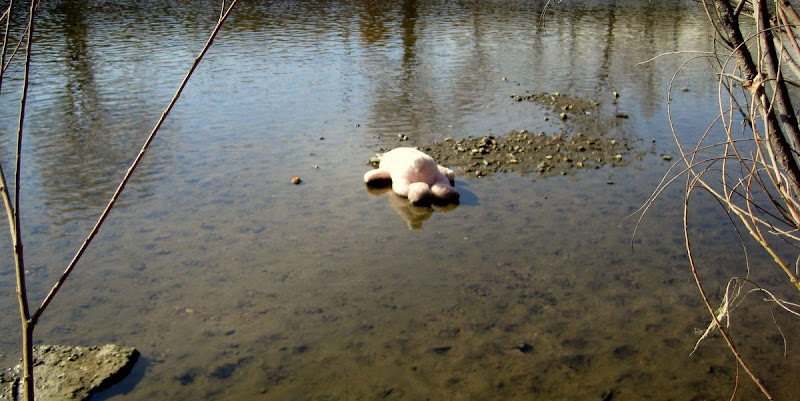 The poor bunny has been there for quite some time ... and I have not had the lack-of-focus enough to go rescue the poor thing. 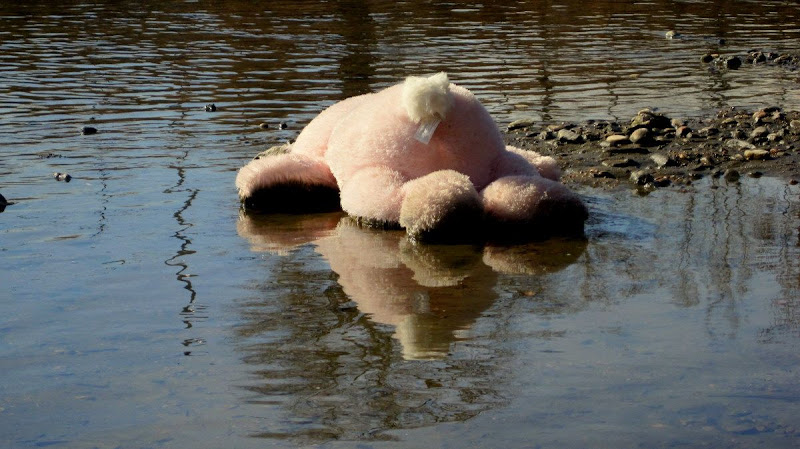 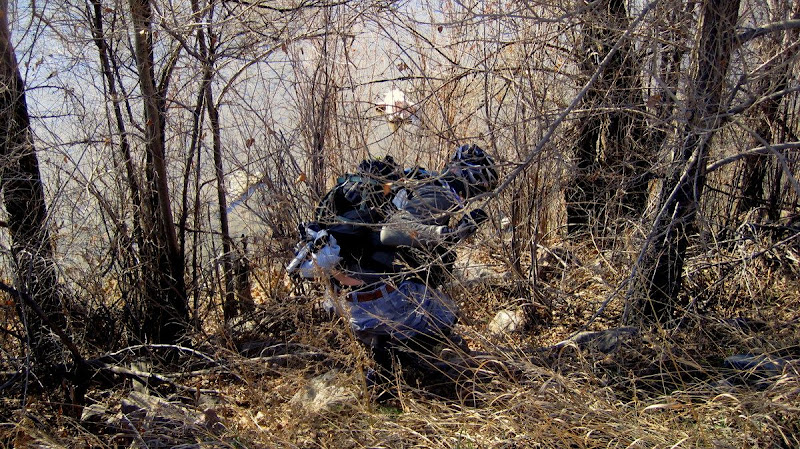 Today, I had a knight in shining armor with me for the lunch roll. Meet TayTay! He braved the wicked willows and made it down to the poor BunBun!

And in one swifty move, he was out in the middle of the river, making the rescue! 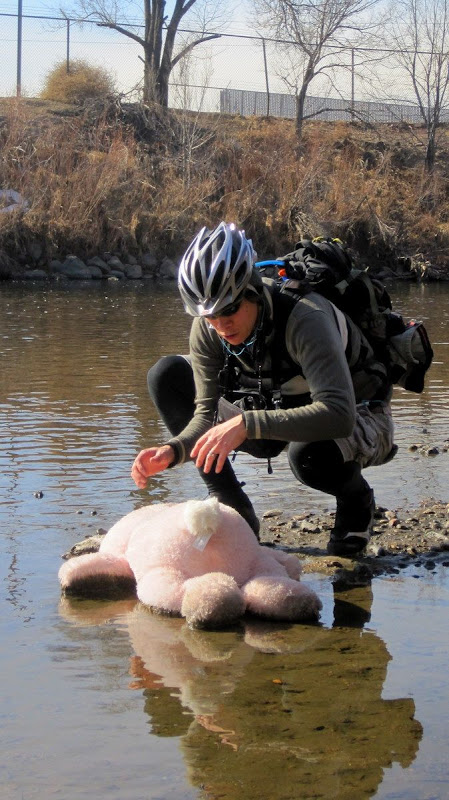 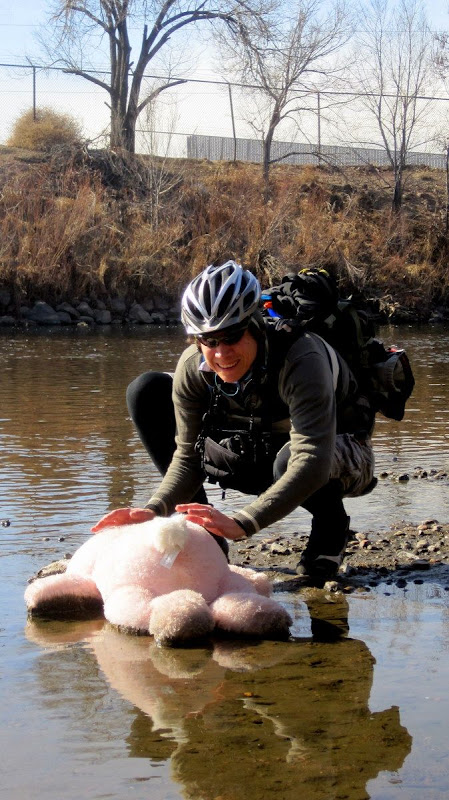 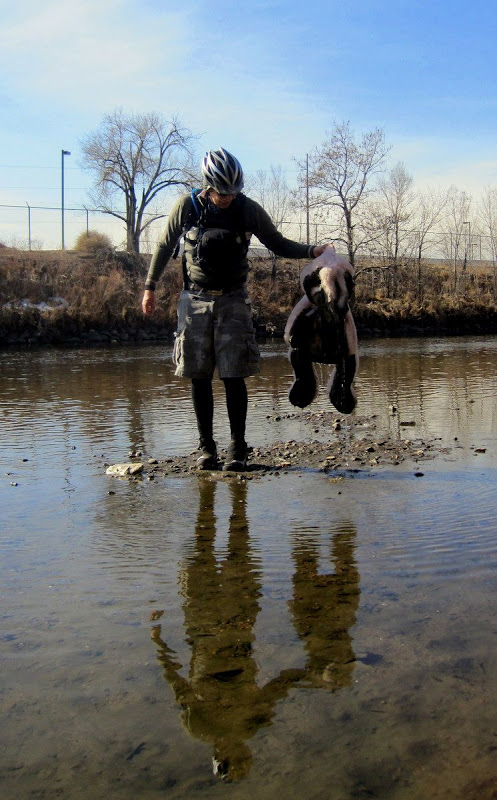 We left BunBun in a nice little cove of sunshine next to and above the river. When he dries out enough at some point, I'm sure to pick him up while out on my bike, put him on my back, and bring him home for Tonka. 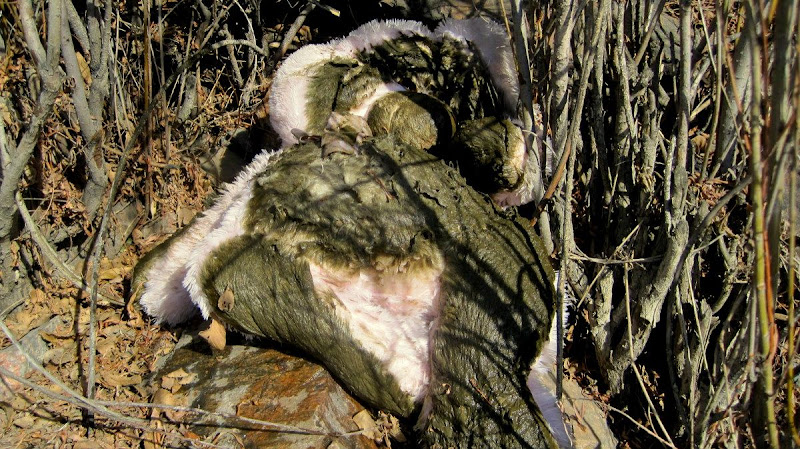 Tonka has found and made a new nest... in Ed's underwear drawer ;-) 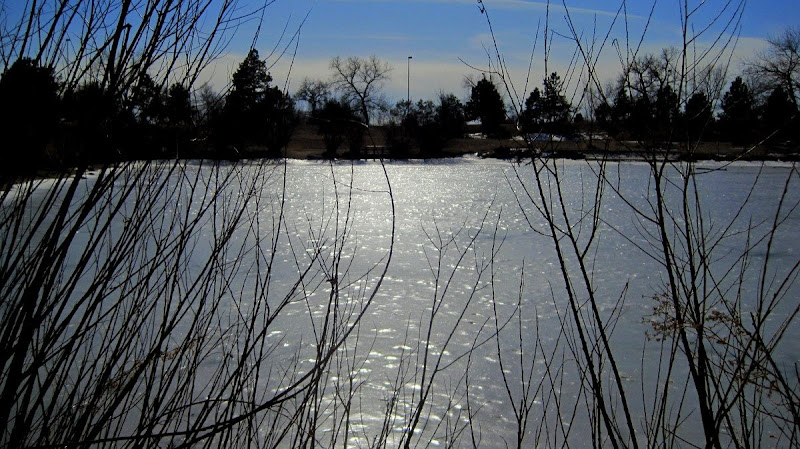 The truth is, I just don't have much to say.

Yes, I am a somewhat auditorily obnoxious person when around people, and can seem to find endless banter to blab and shout about when out... but honestly, I don't have much to say.

Case in point: I had a MARVELOUS Friday Ride, and an STUPENDOUS Saturday Pueblo Ride with the most fantastically fun people... and I don't have much to say for it ... because really, it was just too damn fun and so damn satisfying, words just can't touch it.

In other news, it would seem that in yoga, I can't stand on one foot to save my life ... let alone twist and stretch and balance all at the same time. However, I can get myself into a hand stand and hold it there for a darn long time. Go figure.

for the joy of it

My mother tells me I'm a very determined person. I laugh at her when she tells me this. I can't, for the life of me, think of why she would say such a thing. There just isn't much that I get myself into these days that I would consider needing any form of "determination".

So she reminds me of one story from my childhood (of which I have no recollection): Apparently, when I was a small child, I used to open the lower cabinet doors in the kitchen and take out ALL of the pots and pans, and cover the kitchen floor with cooking apparatus chaos. Then, I'd refuse to put them away. I'd throw a fit; I would scream and yell and whine and cry. (She tells me that sometimes I would hold my breath 'til I passed out cold in complete defiance). Mom said that she would take my hand and literally make me place each pot and pan and lid and bowl, one after another after another, back into the cabinet... only for them all to be taken out again. She uses this story as an example of my determination.

This last Friday, my birthday, was the 37-year old version of this pattern. I was determined ... bound and determined ... to de-tube-ify my wheels (by myself -- seriously, how hard could this possible be?). I have had countless emails with MC, watched videos, procured materials and even set aside a WHOLE DAY to accomplish this task ... and then I wanted to go fly around on my fancy new wings. Looks easy enough to me. I get what is supposed to happen and why it happens and all that.

So, I dressed in my winter mtb clothes, and set to the tubeless task.

So much for determination. That only took me roughly 6 hours. (No, I did not take a single picture).

THAT was a lot of determined effort. It was so much effort, in fact, I was wasted tired by mid-afternoon... and it was all I could do to stay awake for a romantic birthday dinner with my starling. (Thank you, starling, for putting up with my tired self).

Anyway. Back to my silly antics for the past few days.

Friday, the birthday, was such a tube-less-bust that I determined Saturday (and Sunday) to get out to make up for a.) the wasted effort and b.) the lost ride in the sunshine. I saddled up and headed out for what was going to be about an hour and half spinn -- just to prime for a big ride with the boys on Sunday.

It was my plan to hit the meadow loop. Plain and simple and rolly and mellow and light and playfully easy and ... if I was lucky ... just tacky enough to not be ruining the trails. 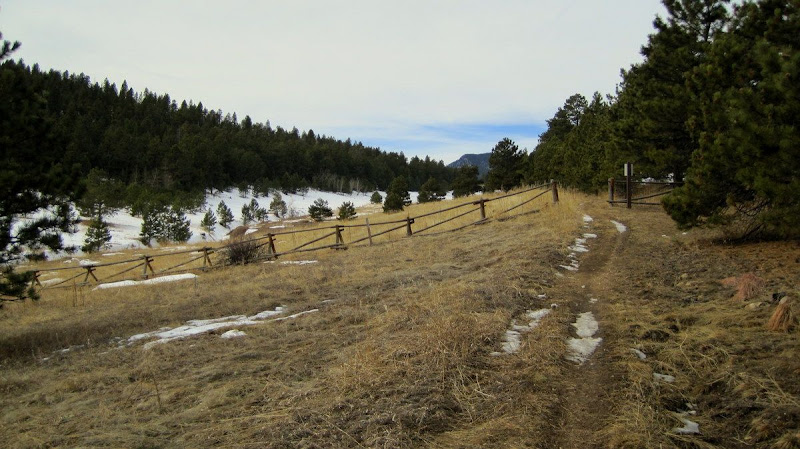 I was such a good girl. I by-passed my first hyper-climbing-exploration trail option to "just ride light" and have a mellow day. Funny stuff there --- because the second option I had to make the same good decision came up and lo-and-behold: up I went. 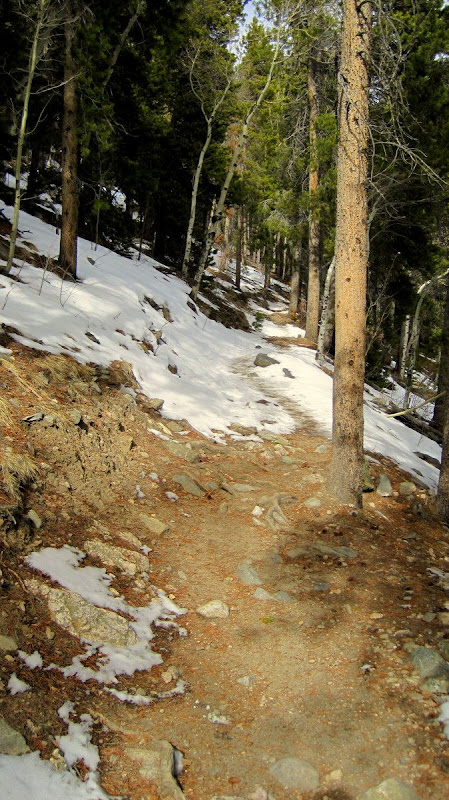 I went uphill with the whole-hearted belief that there was NO WAY ON EARTH that the trail would be rideable much past the first or second switch. I told myself: "I'll just spinn up this hill 'til the snow is too deep and turn around and go home." "Light ride. Light ride. Easy easy easy."

And up I went. And went. And WENT! I started getting giddy! I kept clearing obstacles. I could taste the sweat pouring off my head! My woollie bluebird sweater was SOAKED! I was riding up the whole darn thing -- I kid you not -- in January. 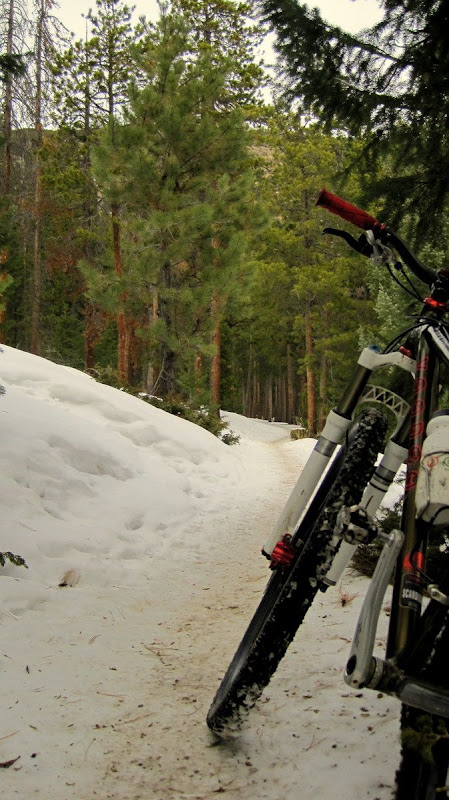 1 absolutely spectacular, snow-pack-tackarific, dirt-flinging hour later, I'm totally getting my solo HAPPY DANCE ON ... on the top of the darn mountain! 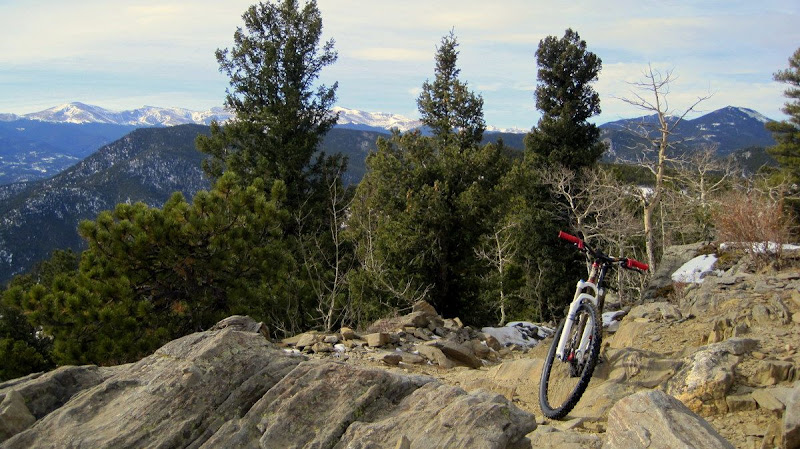 So happy, in fact, that after taking a few blissful moments to thank the universe, I made sure to BOMB back down that trail as hard and fast as I could.

Only issue: the packed trail is only pack-tastic where it's packed ;-) 2 inches off to either side and it's deep and soft and fluffy ... and yup, it took my wheel and launched my happy ass hard onto the ground, and smack into a stump under the snow, back and ribs and all. That only took about 1 minute to happen -- straight off the top. 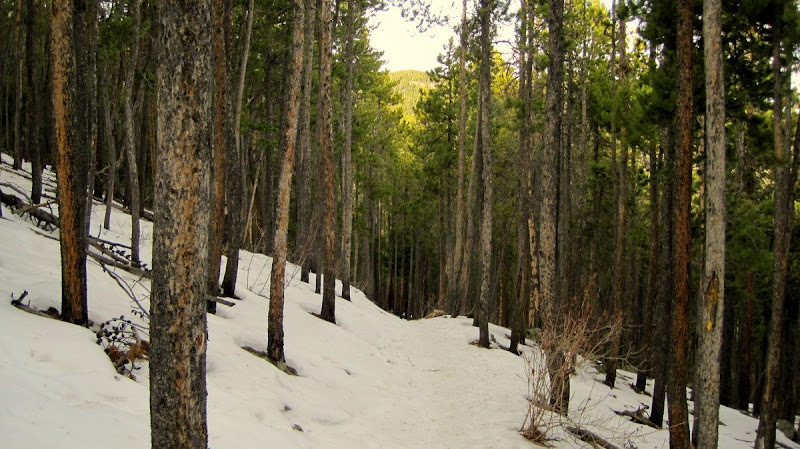 I spent the rest of Saturday in a bliss-inspired effort to contain my happiness a.) that the trail was rideable and b.) that I took such whimsical and thorough advantage of it. (For all the pix, click HERE).

Sundays ride plans included the infamous, vampire boy (calGone), Mr. Juth, and EdE. Our first task on the list for Sunday: get out of the house! second task: get ed (and a working pony) out of the house with me! third joy-inducing task: KEEP UP, SLACKER JENY!!!!

I was beat straight out of the gate! So these are all the pix I took (read the captions, they tell the story).

And I did it. I didn't make them wait TOO long, (altho I'm sure they did slow down quite a bit to keep me in sight) and I didn't fail or bail. Success!!! As Ez likes to say: Durability Training;-)

And last but not least, you know that a Sunday BigBliss Effort wouldn't be complete without some Monday Extra Credit: it was all I could do to drag my happy, bruised, tired body and mind out onto Interval Paths Monday afternoon! But I did -- because doing so made me HAPPY.

As I'm riding along, lost in a daze and trying to put it all together in my mind, I start to read the writing on the wall. However, I cannot for the life of me figure out what that writing is saying. Anyone venture an interpretation?

Let me know what you think the writing on the wall says ;-) I'm dying to know.

the past few weeks have found me out and around town at lunch ... on the pony.

here are pix from today!


I'm not sure anyone will find those interesting... but what the hey. I'm entertained!

Now go get some sunshine before it snows on Wednesday.

soooo wonderfully happy about the sunshine for the last 2 days. had to get a bit of rollin' bliss goin' on to celebrate the warmth and the clear blue skies.

took more pix of the pre-ride antics (tonka) than of the rides themselves... but hopefully entertaining enough ;-)


hope everyone got their daily dose of the sun while it's out!

Steevie, I'm going to kill you! 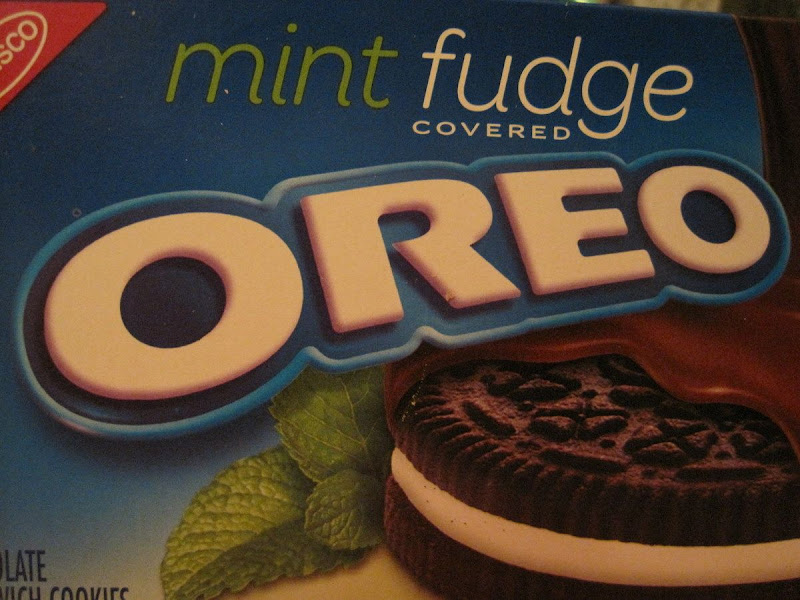 2 days in the light 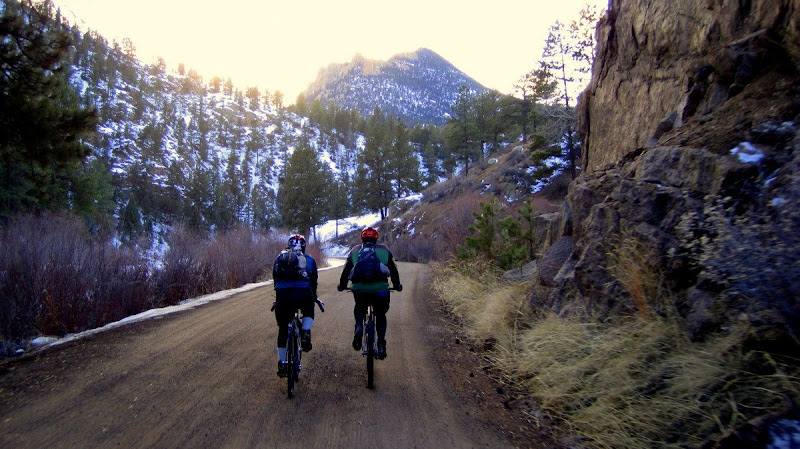 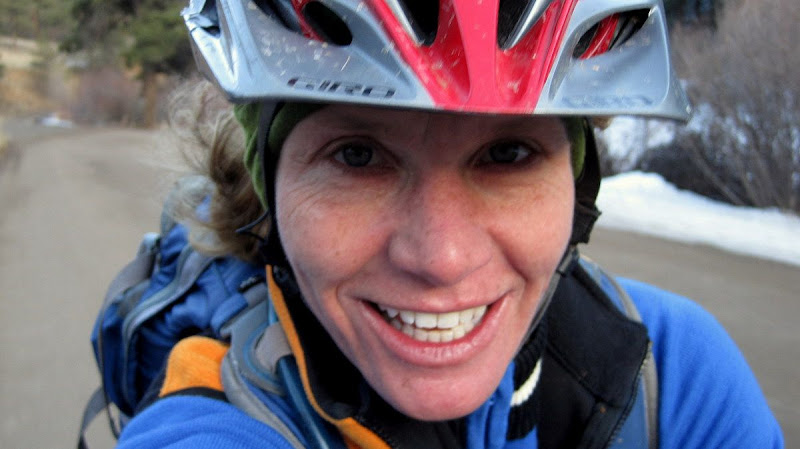 ... on our ride today. seriously, that is a pic of one deeply, deeply happy jeny.

we started in a lovely sukker-hole of sunlight ... topped out at the high point about a 1/4 of the way through, when it started to snow and blow. we ended in a warm, warm afternoon of clear blue sky, with extra fun new singletrack to boot. ah, such CO bliss!

i think this message was put up specifically for ed and steve (and i): 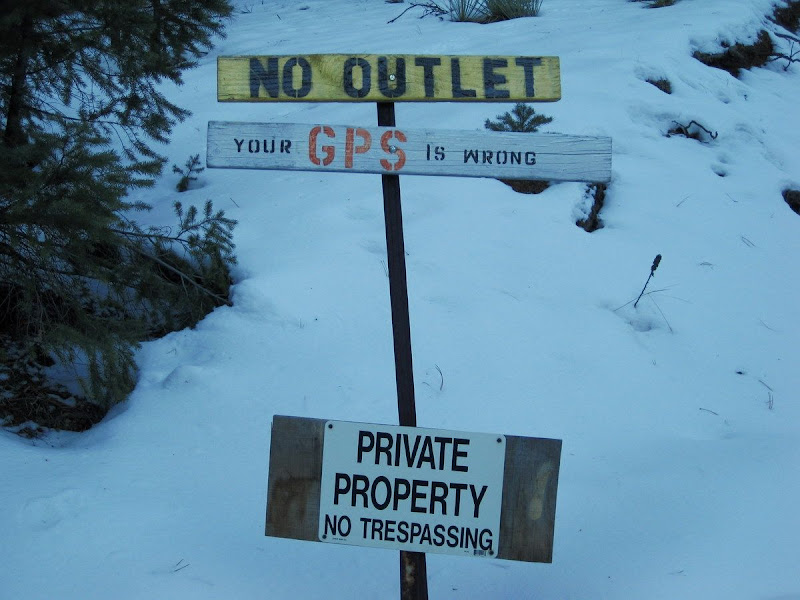 here are ALL the pix from today:


and yesterday!!! ggaaaaahhh! i'm feeling slightly spoiled here... ed and i spent a glowing day out in the sunshine alllllll wonderful day. thank you, darling, for the exploration day.


hope everyone is making every minute count, and enjoying it all!