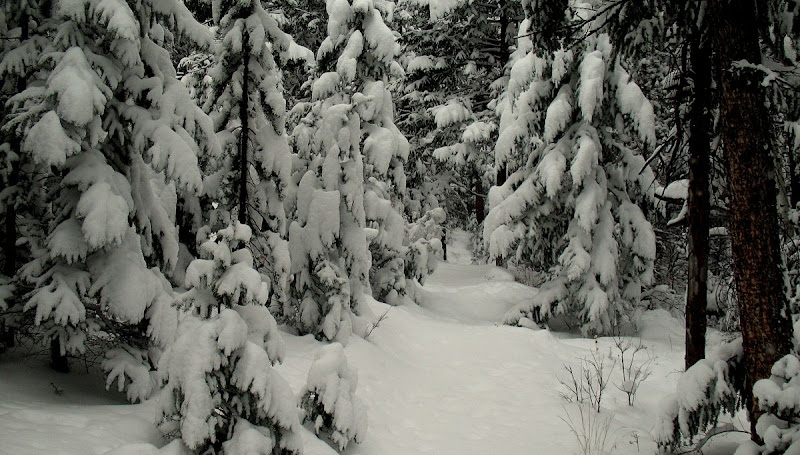 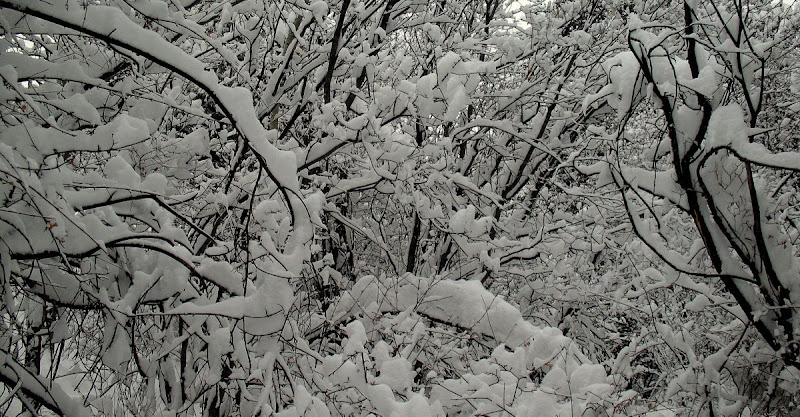 longing for significant outside time these days ... no matter the manner.

we were SO there

Yup. BeanFeSSt 2009: We were SO there... and yet, we somehow SO missed it (it being Everyone else who showed).

Ed and I got a nice, cozy late start to the bitterly cold day. Oatmeal. Coffee. Snuggles with Kitty.

By the time we piled on the woolies and loaded up the ponies, it was a whopping 30 degrees out, and visibility was next to nothing.

That's ok tho. BC likes rowdy weather, and I don't think that Paul has held a single BeanFeSSt with weather any different: usually colder (or downright frrreezing), whiter, and/or wetter than people would otherwise ride in.

We showed up an hour late, guessing that the crew would start riding about an hour late. We passed CalGone's Bat Mobile parked down low, and pulled into the BeanFeSSt Grounds up high. Sure enough, there were a number of crusaders wearing off their hangovers in their cozies around the fire. And, sure enough, CalGone had blasted through, saw the pre-ride carnage, and kept riding. And sure enough, the rest of the crew blasted off about 20 minutes before we got there. Perfect timing! 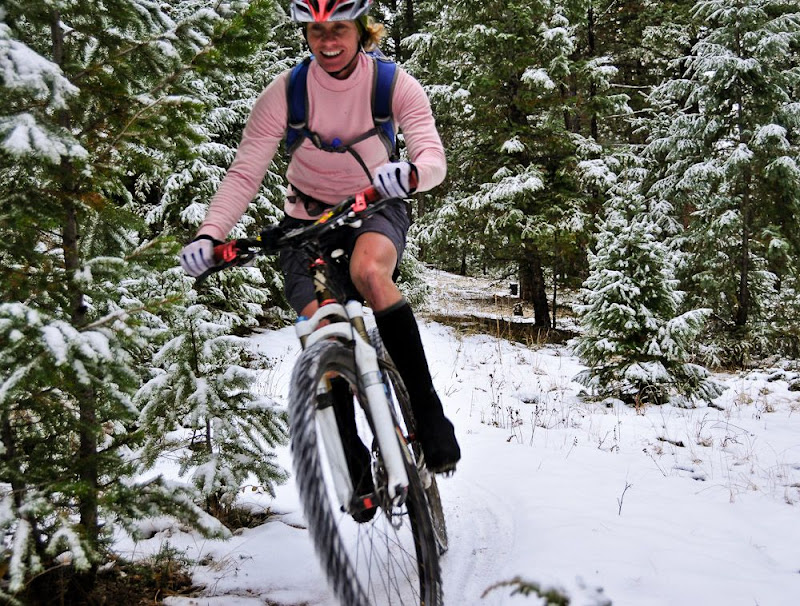 So Ed and I set out on our own 20 mile snow ride in celebration of our '4-year having MET anniversary'. Yup, that is right. We originally met at the BeanFeSSt 4 years ago!

The trails were wonderful. The dirt was amber-colored against the white snow. The sections in the trees held more snow than the wide-open spaces. The trees were holding snow, and as still as could be. We even got to ride some really fun SnowSingleTrack. That is the first of the season for me. It was lovely, and very playful.

I thought we might catch up to the crew. But, no such luck. Ed had his camera, and it was far too beautiful with the snow, the dirt, the trees, the smiles... to pass up picture taking! And, from the wild set of tracks we were following, it looked like the group had split a few times in different directions. We ended up having the entire place to ourselves and didn't run into a single soul! 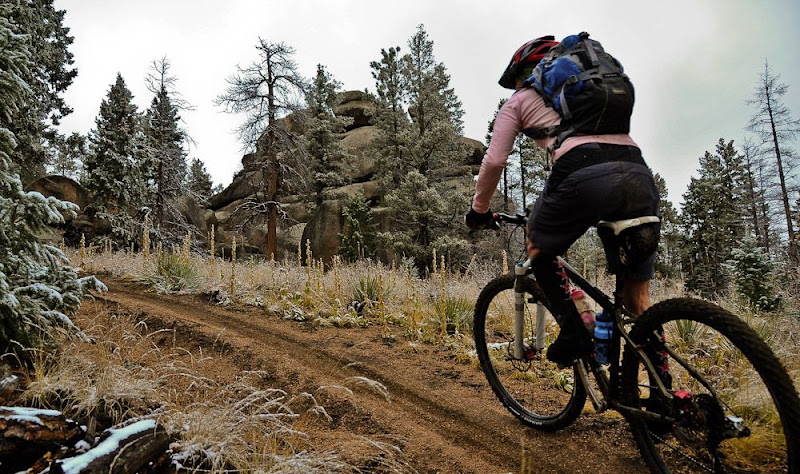 Upon arriving back up at BeanFeSSt Grounds, we were a bit surprised to find that.....drum-roll..... everyone had already left! (Except for SSpike, of course... because I told him he better linger that sorry, hung-over *** of his there til we got back!! ... and Joe, and a couple others) BOOOOO!!! Apparently we really missed out on the festivities from the night before (thank god). It sounds like the Hearty Souls all rode with serious headaches ... got back to the Grounds, and immediately blasted off for home? Or, it could be that Ed and I were just slow. So be it, I guess. But I gotta say: I was really looking forward to seeing some of our FeSStyFolks!!! 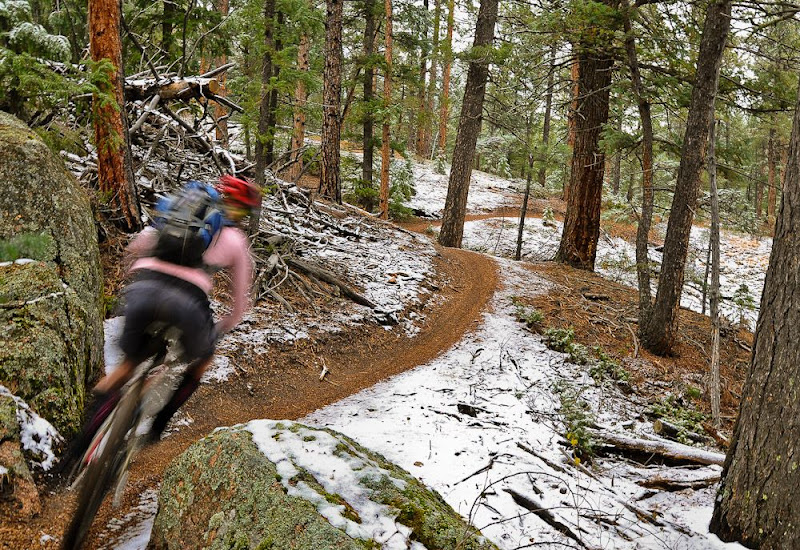 Hope everyone had as spectacular a ride as Ed and I did. Did you hear us hootin' and hollerin' from across the valley? I thought you might ;-)

Alrighty then. We'll try and be a little more on time for the SSnowRide next year ;-) 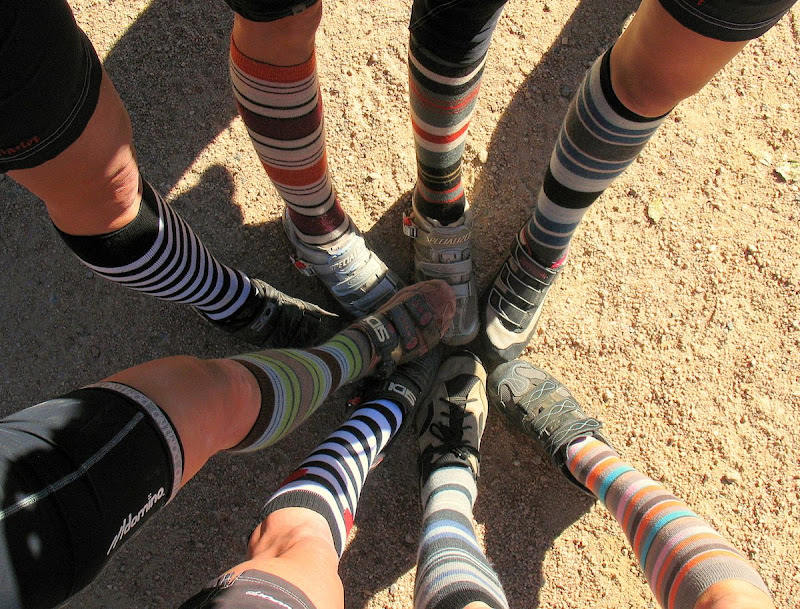 TRace had a moment with her Pony, and the Angel within her Pony (can you see the angel!!) She was taking a vow to obey the Pony, and to love the Pony. 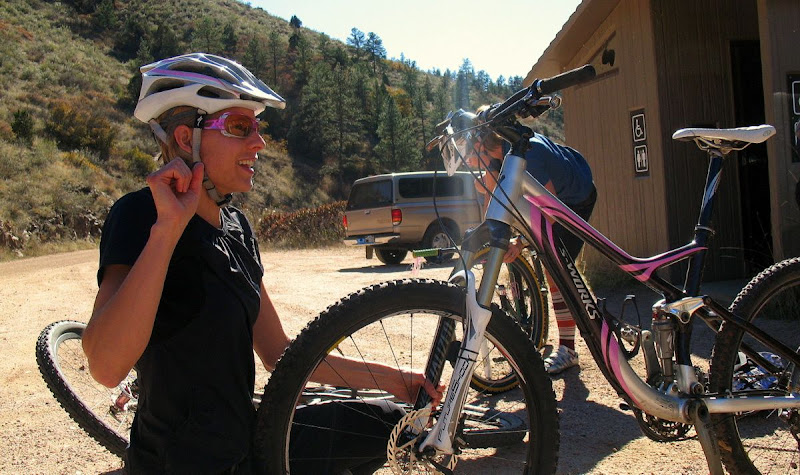 I didn't really realize how many girls showed up until I saw all the Ponies lining up! Quite the crew! 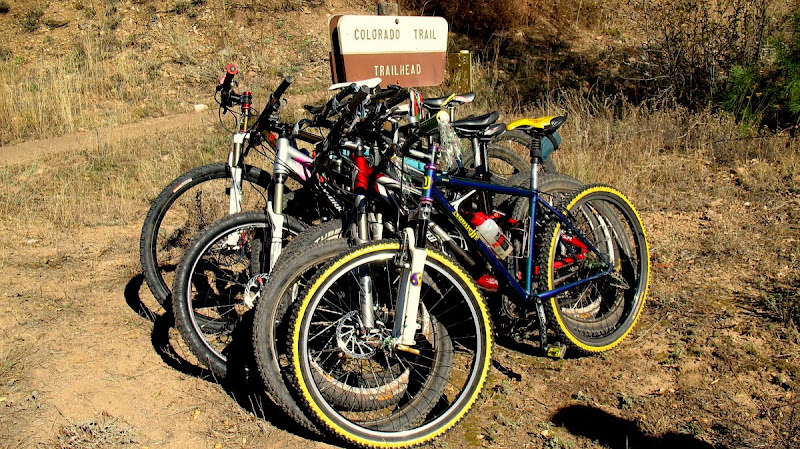 I just really liked this pic of Meg... it captured her sense and spirit for the day: 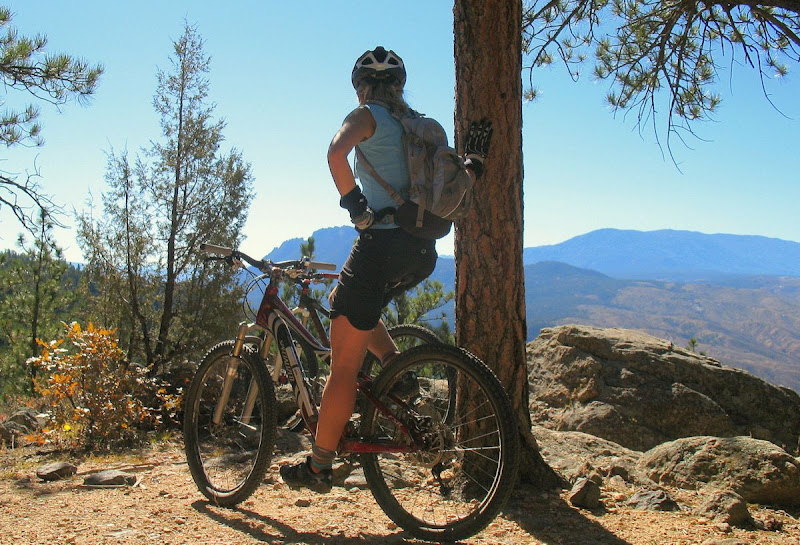 Get it while you can!

Is it odd that I had the time of my life crewing for Lynda and Dave this weekend while they raced in circles and literally beat the pp out of everyone!??! I love my 2 little crack heads!

Unfortunately, I really didn't have the time for pix ... or videos! I thought I would, but I was wrong ;-)

All the big news, which I'm sure everyone reading this has already heard:

You all kick such serious ass it's really not even describable ;0) You all blow my mind, and fill my heart, and I'm so honored to have been your pit angel (Lynda and Dave)! Or, as some of my friends have said: pit bitch ;0) Your huge success has just filled me up with so much energy, and so much inspiration. I hardly have the words. (So I'll just continue to scream and yell at you from here on out ;0) No one has complained yet!).

As for getting on with Life After Moab: I went on a little Pony Pedal tonight, and had a date with my man on the singletrack. 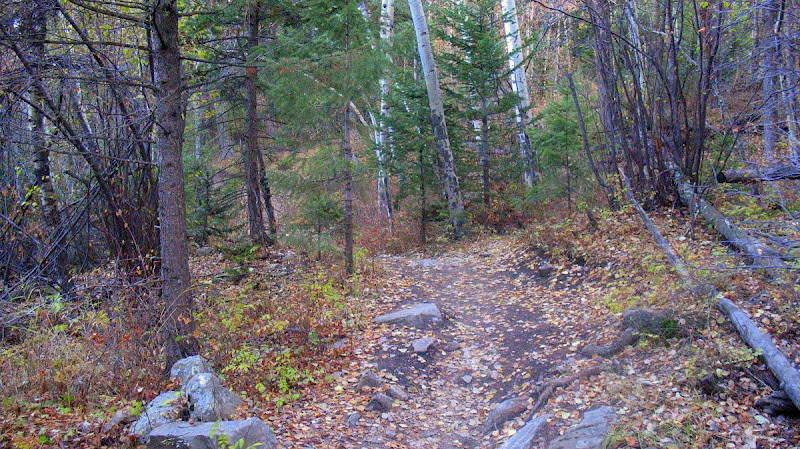 And this kind of sky: And this kind of man (well, specifically, THIS MAN):0) 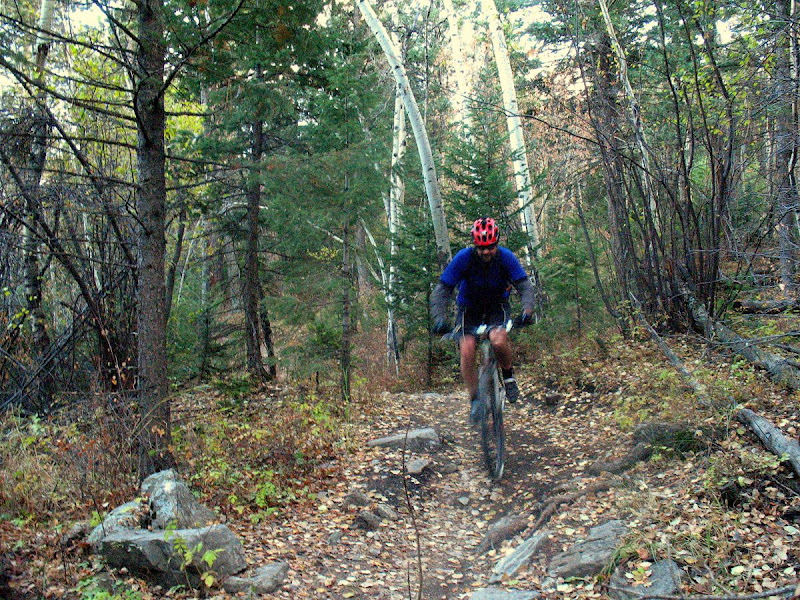 Hope everyone is enjoying the ridiculously short-fast fall we're having!! Get out and get that dirt while you still can! 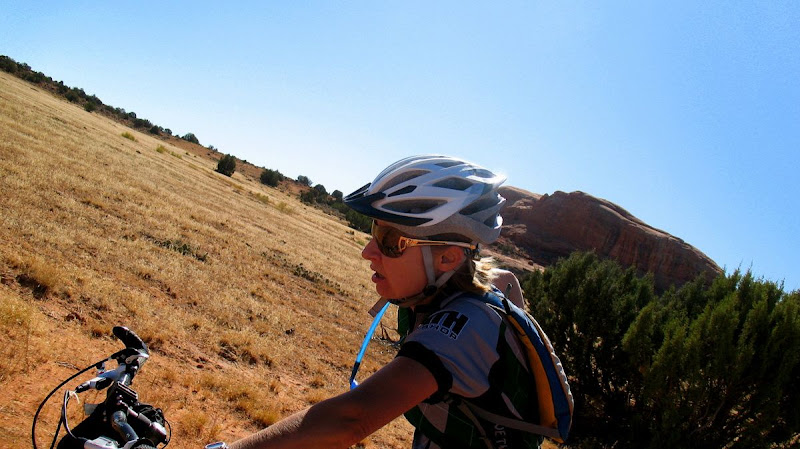 Check out that super steep hill we found in moab. yeah ... really. 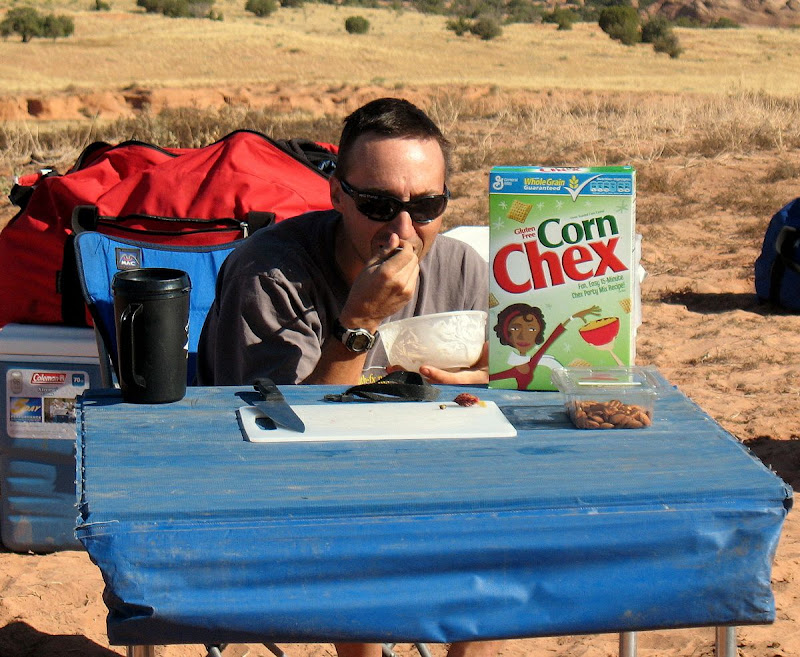 Wait. Haven't I see this picture before? I see a trend starting here. A pattern. Get your Checks while you can! They're the hot new thing! They're the new PINK! 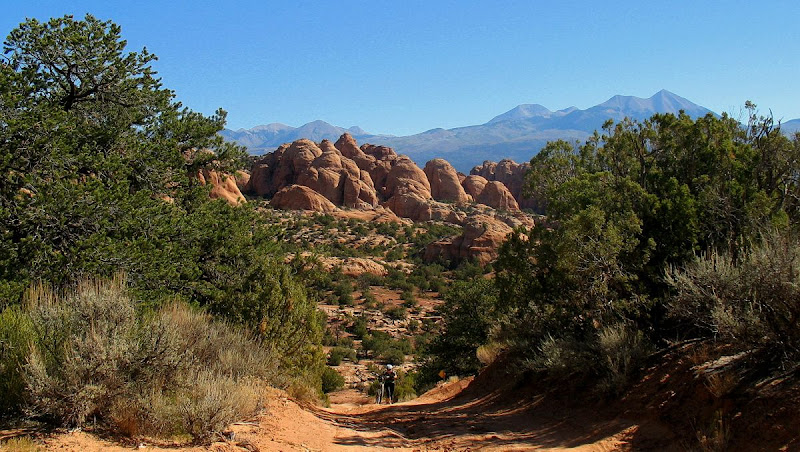 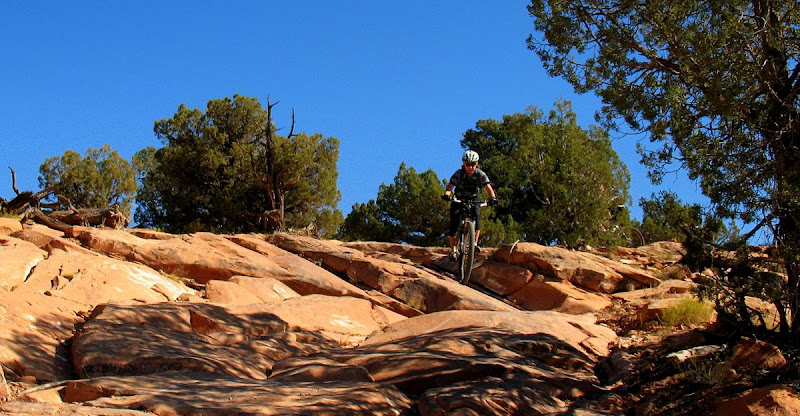 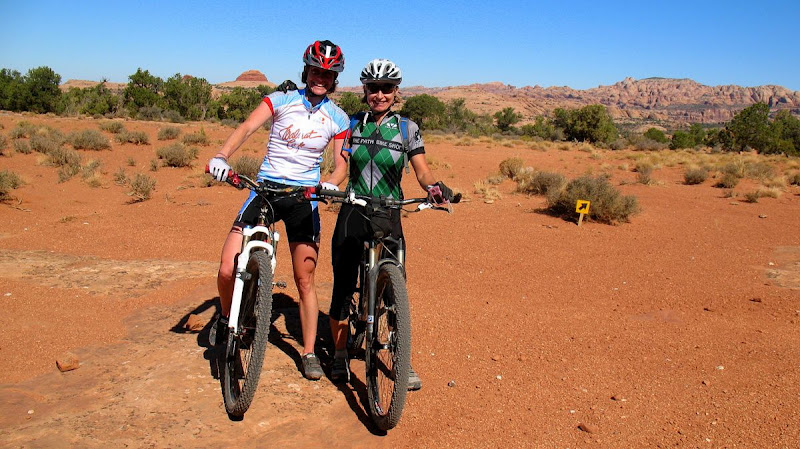 I'm so honored to get to support such loveable and awesome people! I cannot wait to start screaming at them! I mean, rootn' and holler'n FOR THEM!!!

this ONE little thing

I don't know. What do you think of this little conundrum? 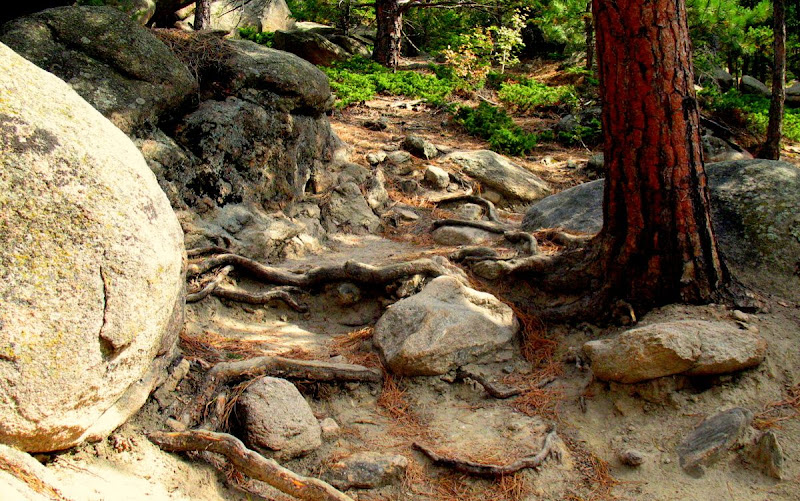 The entrance includes a corner, a water bar, and some oddly placed and poorly timed rocks. So the entrance isn't particularly conducive to keeping momentum or direction. The set up is a part of the challenge.

As always --- remember, this has more pitch that the pic portrays (the vid shows a couple of attempts where I jump off the back... that kinda gives a better idea of the pitch) ... but do you think you can get a good idea of this puzzle?

Yeah. This one's been in the back of my mind for quite a while. FINALLY.

I'm sort of diggin' that my Standard Loop also happens to be a Something Special Loop. And by that I mean, I've really been enjoying my 30-ish mile, 4K' loop from home, and all the spectacular single track that allows me to bliss out on.

Ed and I rolled out late-ish this morning, temps in the super sweet 50s. The skies were dynamic, and the breeze carried with it a deep, deep chill.


Except for that one little thing. It's on the back side of 3-sisters. I really, really needed and wanted to clear that one little puzzle of a corner + root + rock conundrum. I've not spent much time working it, looking at it or really giving it much thought beyond: "man, I would REALLY love to clean that!"

So today, since it was so lovely out, and since Ed let me seduce him into working with the camera, I thought I'd stop 3/4's of our way through our nice loop and have myself a little session time.... You know, just because we can ;0)

Thanks hon... for the fantastic ride, and for watching me get all OCD on that one little thing!